The Business of BPO’s 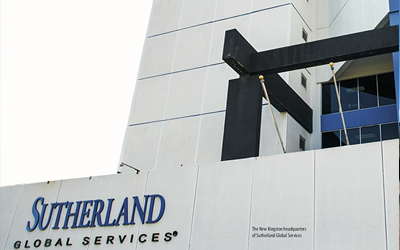 oni Epstein’s brand-new renovation of an old steel factory on 41⁄2 acres in Montego Bay’s freezone is kitted out to look like a version of the hip, millennial-friendly offices in Silicon Valley and big cities today with big motivational slogans on the

walls in mixtures of typefaces, industrial finishes, beanbags, colourful sofas and balloons. Partitions are low, music is playing in the public spaces which are oral masteron open and airy. The owner of this, the largest Jamaican-owned business process outsourcing company, itelBPO, is now putting a gym, showers nandrobolin, and an ATM into this 40,000 square foot headquarters.

Epstein is having to add 60,000 additional square feet on the site which handsstrong.com will include a 6,000 square foot cafeteria, a small football field and a boardwalk terrace built on reclaimed land into the harbour. A similar scene is taking place elsewhere in Jamaica’s biggest towns, as BPOs expand like wildfire and compete for a small pool of qualified hires in an industry forecasted to be worth US$250 billion globally in 2022. Today, there are about 60 of these firms in Jamaica, employing 26,000 housed in about 1.5 million square feet of office space. The sector looks to possibly double headcount and office space taken in the next couple of years. Companies from AT&T to Lyft to Delta to Spotify, from Aetna to Hilton are arriving on Montego Bay’s shores and now to Kingston and Mandeville.

Sutherland Global country head Odetta Rockhead-Kerr, a 22-year industry veteran, says 65% of her revenue comes from Fortune 12 companies. A large online retailer’s customer service alone counts for 4,000-5,000 employees in Jamaica across three BPOs. By June, Stanley Motta will complete what’s touted as the largest tech park in the Caribbean, a US$30 million, 236,000-square foot space on Half Way Tree Road at which one client alone, Alorica, will employ 5,000 adding to its 1,000 plus employee space in Portmore.

JAMPRO says the industry puts US$325 million into the economy annually. The three (at least) largest private employers on the island are BPO firms. Conduent, formerly Xerox, is at 7,000 with Sutherland at its heels. Meanwhile, as Yoni Epstein observes, one could spend millions of dollars creating a hotel over a period of years, using up lots of land, energy and natural resources, only employ 1,000 people and inject less money into the local economy.

Responding to the alarm raised about available space, local entrepreneurs are moving to provide the large, flexible, affordable offices clients need. What BPOs usually want is a warm shell — a building with ceilings, floors, lights, HVAC and bathrooms. The BPO then puts in the interior offices and everything else. Sutherland builds to meet U.S. Occupational Safety and Health Administration standards.

A mile from Epstein’s itelBPO and inspired by the success of BPO pioneer Patrick Casserly, Barnett Limited has taken advantage of owning hundreds of acres of Montego Bay farmland to become the largest developers, as opposed to operators, of BPO space on the western side of the island. Their 48-acre Barnett Tech Park has 200,000 square feet in use now out of a total size of 800,000 square feet. Mark and Paula Kerr-Jarrett say that the Development Bank of Jamaica and JAMPRO have done a remarkable job in pushing the industry. The DBJ loans up to US$5million at 4.5% to build BPO space repaid over 12 years and it has loaned US$67 million to help build 900,000 square feet in the last five years. Now, Paula Kerr- Jarrett says even Filipino BPO entrepreneurs, who have the largest industry employee total in the world at 1.2 million are interested in setting up in Jamaica. “They say they see Jamaica’s potential as what the Philippines looked like 10 years ago.” 2013’s 195-mph-wind Typhoon Haiyan there, with 6,300 deaths, also spurred interest in our alternate location, she says. And Yoni Epstein says the devaluation of the dollar has made Jamaica competitive with the Philippines salary-wise.