AT THE WATER’S EDGE

Opened in March 2020, Buttonwood Reef is situated on an idyllic seafront spot in Hermosa Cove Boutique Resort in Ocho Rios. The six-bedroom villa spans almost 9,000 square feet of outside and indoor living space. Its exterior amenities include an infinity edge pool with a 180-degree view of the Caribbean Sea, a mini putting green, several outdoor dining and lounging spaces as well as a variety of water sport activities.

In addition, villa guests may take advantage of the activities offered on Hermosa Cove’s sprawling 12 acres, including their jogging trail, gym, spa and yoga pavilion, tennis courts, private beach, swimming pools and the resort’s restaurant and bar. “One of the unique features of Butttonwood is that you are in a private villa, but have all the other benefits of a boutique villa resort,” said John Bailey, the villa’s owner.

Bailey is passionate about the villa business. A few years ago, he and his family redeveloped their home, Canoe Cove in Old Fort Bay, into a successful luxury villa. “When we developed Canoe Cove, it was an awesome experience and I just fell in love with the villa space. I loved the conceptualizing, planning, execution and marketing. I saw the potential for other opportunities because the high-end, luxury villa market seems to be a growing and dynamic space.” After the renovation of Canoe Cove, Bailey became friendly with Clayton and Deb Korver, who own Hermosa Cove. He was given the opportunity to purchase two prime lots in Hermosa Cove, where the old main house and neighbouring guesthouse were originally located. Buttonwood Reef replaced the main house, while the guesthouse was renovated to become Sea Biscuit, a two-storey, three-bedroom villa which can be rented on its own or as a part of Buttonwood.

Bailey’s passion is evident throughout Buttonwood and was a guiding force in the overall vision for the property. “We wanted to create a luxurious, open space with a modern, tropical Caribbean vibe. The villa is literally sitting on the edge of the ocean, so we wanted the emphasis to be on the water with all the rooms facing the sea and a focus on watersports. On the experience side, we wanted guests to be able to come to the villa and chill or be as active as they wanted, and as the space allowed.” Along with a team of local and international architects, interior designers, landscape artists and project managers, Bailey was successful in creating a villa to match his vision. 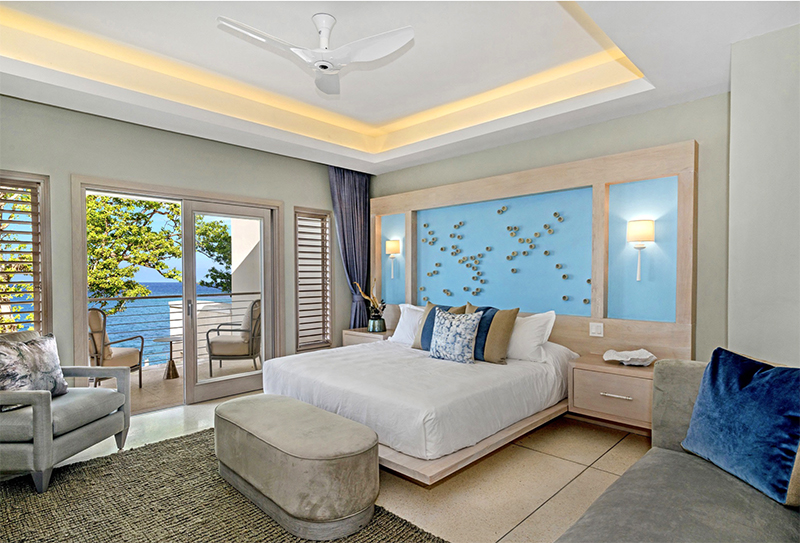 On entering Buttonwood, you are greeted by an expansive view of the Caribbean Sea floating beyond the large open plan living and dining room, verandah and pool area. “The ocean is a part of the whole experience from the moment you walk through the front door,” explained Bailey. In addition to the shared living spaces, the ground floor houses two bedrooms as well as an entertainment room, which can be converted into a conference room and office, depending on the needs of the guests. This latter feature is particularly apropos given the changing focus on working from home due to the pandemic. There are four bedrooms on the second floor, each with its own private verandah. As a unique feature, all rooms in the villa, including the en suite bathrooms, have sea views. The one exception is the bathroom in the upstairs bedroom named Sea Fan, which instead has a luxurious outdoor shower and bath nestled on a lush garden terrace.

AT THE WATER’S EDGE